We are in for such a wonderful surprise on today’s Welcome Wednesday. Ruth Casie has prepared a very special presentation for her newest release THE PIRATE’S JEWEL. 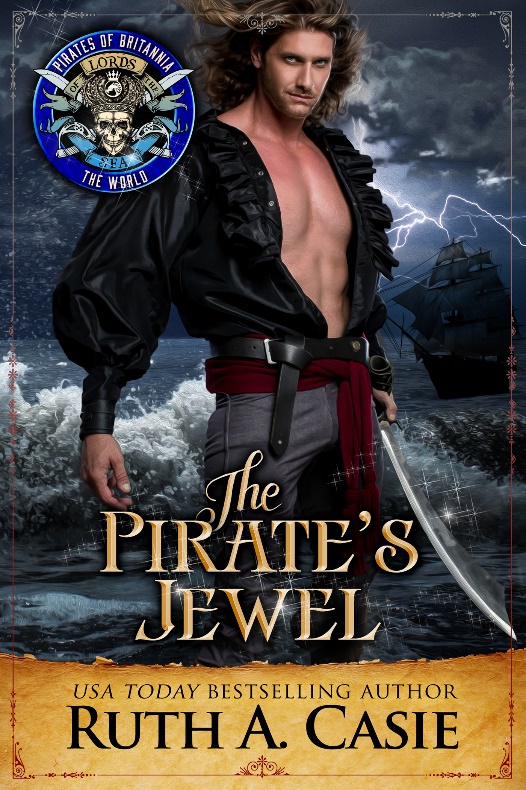 So sit back, grab a glass of your favorite beverage (white wine’s in the fridge) and enjoy this TV broadcast.

The Pirate’s Jewel
Previously
Recorded
Welcome to this special edition of The Inside Scoop. I am your host and
moderator, Justin Case. In our continuing effort to bring you information about
the people portrayed in The Stelton Legacy, we’ve been able to pull off a real
coup. Today our guests are Lord and Lady Wesley Reynolds, the parents of Lady
Lisbeth Reynolds-Stelton. Lisbeth is the wife of Alex Stelton, the seventh son
of the seventh son of Phillip and Celeste Stelton, but that is another story.

Tonight we meet Lady Darla Maxwell, a
young woman whose father, Graeme Maxwell, and close friend, Lord Ewan MacDougall
were searching for a suitable husband for her. Lady Darla has a … magical
background which as a young woman she sought to deny. I hope we can find out
more about how her magic influenced the outcome of the story.

Lord Wesley Reynolds, the son of the
well-known silk merchant William Reynolds, has a most interesting background
that I hope he’ll elaborate on today. It’s what made him the man trusted by the
King of England as well as the Guardians of Scotland.
One moment, please. I’m getting
instructions from our producer.

(Listens to instructions over his ear piece).
Ladies and gentlemen. Our producer has just informed me our guests have arrived
at the studio.

Ah. The lights have dimmed. A hush has
come over the studio. I can see into the wings. Yes. The door has opened. The
anticipation in the room is palpable. Wait. I see them. They’re walking toward
us. They have a stately and commanding appearance, and they’re holding hands.
It is very tender and touching.

(Justin rose from his chair as his guests’
approach.)

(Darla and Wesley hold hands. Wesley
eases back in his chair and crosses his legs in a relaxed position.)

Justin: Thank you for granting us an
interview. Everyone here at Inside Scoop is excited you’re with us.

Lord Wesley: Lady Darla and I are happy
to be with you today.

Justin: Our time is short so unless you
have any questions I’d like to get right to the questions.

Wesley: I have no questions at the
moment. Please begin.

Justin: (Papers rustle as Justin gets
settled.) Lord Wesley, you have a very interesting personal history with
several twists and turns. Please explain how your background made you the man
you are today.

Wesley: As a young man I followed in my
father’s footsteps. He was both an excellent silk merchant and business man. He
taught me the silk business from cultivating the silk worms, to making the
final bolts of cloth, to selling and shipping the bolts. I learned by traveling
with him and observing him at his work. He was a well-respected merchant and
excellent negotiator. When he passed away, I was ready to take over although I
will never be able to take his place.

Justin: I understand you sailed out of the
Cinque Ports in southern Europe, in the service of the King of England. Some
say you were a privateer.

(Wesley let’s go of Darla’s hand and moves
to the edge of his seat.)
Wesley: Why do you ask?

Wesley: My Love, it still pains me to
think of those days much less speak about them.

(Darla gives her husband an encouraging
smile. Wesley turns back to Justin and lets out a slow breath.)

Wesley: I provided the king with the
silks he wanted, as I did with many monarchs across Europe. Because of my
connections I was a good sounding board for him. I had my own ships and one
thing led to another. I had no love for the Spanish. They thought I was a
charity, taking my goods without paying for them. So, I simply took from their
ships to repay their debt. All in all, a good transaction.

Darla: When Wesley’s father took ill he
went to help him.

Wesley: There were certain family
incidents that happened. Over the years, my brother told me what happened and
why. I believed Darla’s father and Lord Ewan, my father’s closest friends
plotted against him and my family. I thought they ruined his business and took
his property, circumstances that led to his death.

Justin: You said you thought they
conspired against your father. I surmise you don’t believe that now. What made
you believe it in the first place and why did you have a change of heart?

Wesley: Simply said, I put my trust in
someone close and was deceived.

Justin: Did this have anything to do
with the pirate king, MacAlpin?

(Wesley chuckles.)
Wesley: I understand why you ask. The
MacAlpin has the reputation of being a ruthless savage pirate. But, in all my
dealings with him he proved to be fair and trustworthy. He was instrumental is
seeing justice was served. It was difficult after years of believing something
so strongly that it became your essence, to have the truth uncovered and
recognize you’d been lied to for a very long time.

Justin: I’m sure it is. I understand
Lady Darla was at your side.

Darla: From the first moment we met on
the docks by my father’s ship and I mistook him for Lord Ewan’s son-in-law,
Magnus I was drawn to Wesley. I was relieved to learn he wasn’t Magnus. Very
pleased in deed.

Wesley: Yes. Maxwell and Lord Ewan were
nothing like I expected. After my father’s death I was told again of their
thievery, had it stamped into my brain. I didn’t question it. You see, from an
early age I was fostered to the Highland Maxwells. When I came back and worked
with my father he had already moved the family from our home on Lord Ewan’s
island, forced out I was told. I accepted it as truth and when my father died I
vowed to take revenge for all the injustices Graeme Maxwell and Ewan
MacDougall
did to my father and family.

Darla: Wesley thought to use me as a
pawn in his effort to hurt my father.

Wesley: (He turns to Darla) That wasn’t
one of my shining moments. The more time we spent together and the more I got
to know you, your father, and Lord Ewan, the more I knew I had it all wrong,
but evil kept buzzing in my ear, pushing me to carry out the plans.

Darla: You found the truth. It’s all
over now.
(Wesley holds Darla’s hand and looks
into her eyes.)

Wesley: I’m a very lucky man.
(Justin coughs to remind them they aren’t
alone. They both turn toward Justin.)

Justin: Lady Darla, I understand you
have unique insight—
Wesley: Come
Darla. (Wesley gets to his feet.) It’s time to leave.

Justin: M’lord. I apologize if I have
offended you or your lady.

Darla: No, Mr. Case. My husband is very
protective. (Darla stands next to her husband.) I do have a unique ability. I
have second sight. I see things before they happen. Some people—

Darla: Mr. Case gets your meaning. Some
people believe it witchcraft. They say and do foolish things. It is why I kept
to myself while growing up. Why I never allowed myself to become attached to a
gentleman. How could I get someone I loved tangled in that rat’s nest. Some may
see my gift as a blessing, but I assure you it is not. Imagine knowing
something terrible is going to happen and you’re not able to influence it at
all. I thought I would never marry. I was satisfied with being alone the rest
of my life. I was wrong. I had no idea that I waited for the right person, my
soul mate. I never saw that coming until I met Wesley. So much for my second
sight. When I found him I knew I would never let him go. He is my love, my
life.

(Wesley takes his wife in his arms.
Justin stands.)

Wesley: As you are mine. (Wesley turns
to Justin.) Deception and family honor were at stake.

Darla: So was my heart.

Wesley: Do you have any other questions?

Justin: No, Lord Wesley. Thank you both for speaking to us. (He turns to the
audience.) Thank you for coming today. Lady Darla hasn’t told us much about her
second sight, but I understand it is quite interesting. You can find out more
about Lady Darla’s magic and Lord Wesley in The
Pirate’s Jewel. Until next time.

The Pirate’s Jewel: Blurb:
Deception and family honor are at stake – so
is her heart.
Wesley Reynolds will do anything to avenge his
family’s banishment from Dundhragon Castle even throw in with the notorious
pirate, MacAlpin. His plan, ruin Lord Ewan’s trading network. He has a more
devious plan for his father’s ‘best friend,’ the man who abandoned them at the
eleventh hour. He’ll ruin the man’s most precious jewel, his daughter Darla.
Wesley’s so close to ruining the trade network and succeeding he can almost
taste it, but revenge is not nearly as sweet as Darla’s kisses.
Darla Maxwell, beloved by her parents has no
prospects of marriage. Her father and Lord Ewan search to find her the right
husband. Darla’s special gifts are frightening to many. She has visions that
often come true. The murky image of a man haunts her, she’s sure it’s Lord
Ewan’s soon-to-be son-in-law, but the vision morphs when she meets Wesley. The
meaning couldn’t be any clearer to her, her destiny lies with Wesley. 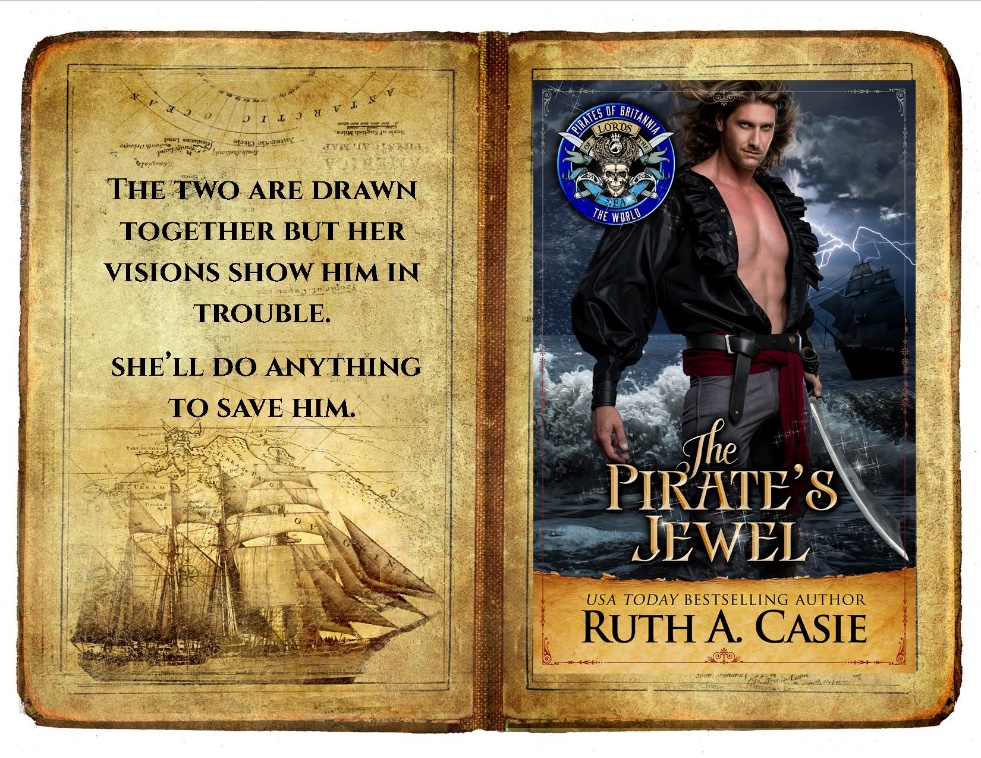 When revelations surface indicating Wesley has
been deceived and his revenge misplaced. Will he find the truth of what really
happened to his family in time to stop the pirates? Will Darla ever forgive
him? Will he ever forgive himself?
Buy Link:
Kindle Unlimited https://amzn.to/2Cyrbev

About
the Author
RUTH
A. CASIE is a USA Today bestselling author of historical swashbuckling
action-adventures and contemporary romance with enough action to keep you
turning pages. Her stories feature strong women and the men who deserve them,
endearing flaws and all. She lives in New Jersey with her hero, three empty
bedrooms and a growing number of incomplete counted cross-stitch projects.
Before she found her voice, she was a speech therapist (pun intended), client
liaison for a corrugated manufacturer, and vice president at an international
bank where she was a product/ marketing manager, but her favorite job is the
one she’s doing now—writing romance. She hopes her stories become your favorite
adventures. For more information, please visit RuthACasie.com or visit her on
Facebook, @RuthACasie, Twitter, @RuthACasie, or Pinterest RuthACasie.
Social Media
Links:
Website:
https://ruthacasie.com/
Email:  mailto:ruth@ruthacasie.com
Personal
Blog:  http://www.ruthacasie.blogspot.com
Twitter:  https://twitter.com/RuthACasie
Facebook
Author Page: https://www.facebook.com/RuthACasie/
Amazon:
https://www.amazon.com/Ruth-A.-Casie/e/B005V0YEVU/
BookBub:
https://www.bookbub.com/authors/ruth-a-casie
LinkedIn:
http://www.linkedin.com/pub/ruth-seitelman/6/6b7/964
Pinterest:
https://www.pinterest.com/ruthacasie/
Goodreads:
http://www.goodreads.com/author/show/4792909.Ruth_A_Casie
YouTube:  http://bit.ly/RuthACasieYouTube
Ruth’s
Newsletter Signup:  http://ruthacasie.com/contact.html#newsletter
Instagram:  https://www.instagram.com/ruthacasie/
AllAuthor:
http://ruthacasie.allauthor.com
0shares
Scroll to Top