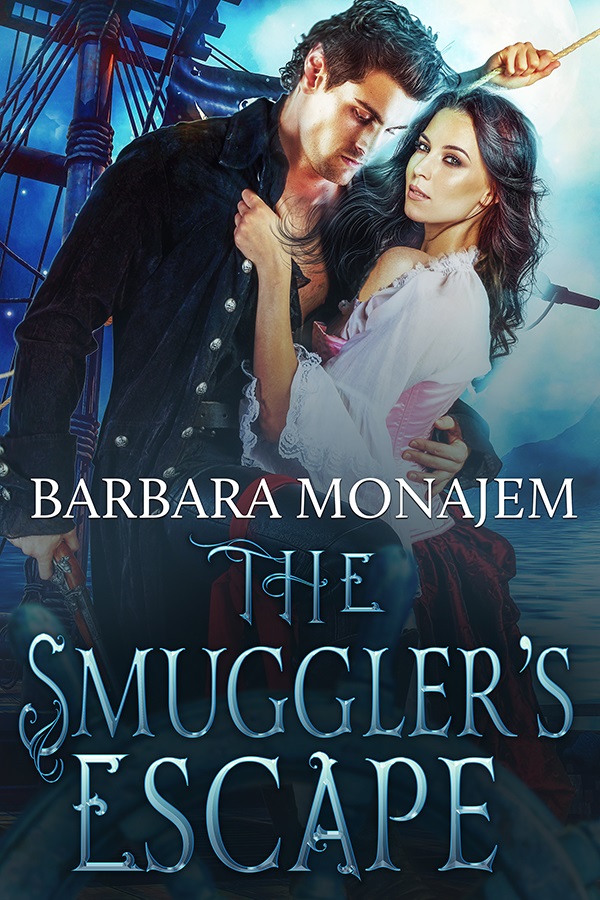 On today’s Welcome Wednesday, I welcome popular writer of Regencies, Barbara Monajem, Barbara is celebrating the release just a week ago of her latest book, The Smuggler’s Escape.
Please tell us about the history of this particular book.

Ten years after I first wrote the story of The Smuggler’s
Escape, it’s finally out in the world. Why, you ask (or at least Barbara Bettis asked)
did it take ten whole years?

To tell the truth, it didn’t. It spent most of the time
moldering under the virtual bed where an author puts manuscripts she doesn’t
know how to fix, but can’t quite bring herself to discard forever. (I keep
almost everything. I’m really, really bad at throwing things away.)

Years ago, when I entered contests for unpublished writers,
the first scene (now the second one) actually won one of them! I was thrilled
when it garnered a request for the full manuscript from an editor—but she
rejected it. Rightly so.

For one thing, it was too long. Way, waaay too long. For
another, it rambled away from the main plot, giving secondary characters too
much room on the page. Also, the motivation was unconvincing. And in one
version (there are always more than one), the hero was an inconsiderate lover. I
had forgotten about that flaw until I started writing this blog. Why, if he was
such a dud, would the heroine want him back?

I had plenty of ideas for other stories, so I set that
manuscript aside and moved on… Then last year, when I had finished the final full
manuscript of my Scandalous Kisses series and was wondering what to do next, I
discovered that ten-year-old manuscript under the virtual bed and read it. And
liked it! There were lots of good bits – action and adventure, banter between
the hero and heroine, and some lusty love scenes, too. (The hero had improved
greatly in that version.) All I had to do was fix the motivation, cut about
20,000 words, promise the secondary characters that they would have their own
stories later, and voilà!

There’s also a sequel under the virtual bed. It too needs
work—and I can’t wait to get right down to it!

Blurb:
After
escaping the guillotine, Noelle de Vallon takes refuge with her aunt in
England. Determined to make her own way, she joins the local smugglers, but
when their plans are uncovered, Richard, Lord Boltwood steps out of the shadows
to save her. Too bad he’s the last man on earth she ever wanted to see again.
Years
ago, Richard Boltwood’s plan to marry Noelle was foiled when his ruthless
father shipped him to the Continent to work in espionage. But with the old man
at death’s door, Richard returns to England with one final mission: to catch a
spy. And Noelle is the prime suspect.
Noelle
needs Richard’s help, but how can she ever trust the man who abandoned her? And
how can Richard catch the real culprit while protecting the woman who stole his
heart and won’t forgive him for breaking hers?
Excerpt:
Setup: Noelle needs Richard’s
help, but she doesn’t want him interfering in the smuggling business. She
refuses to marry him, and she can’t afford to let him seduce her, either.
Richard has other ideas…

Noelle slid off Snowflake’s back,
passed her to a surprised groom, and hastened toward the house. The wind ceased
its fitful snatching at her bonnet and tore it off good and proper, dancing
with it in the sunlight, tossing it around the side of Boltwood Manor.

Noelle picked up her skirts and
ran after the hat. The wind teased it away from her grasping fingers and threw
it this way and that across the lawn. Noelle followed, cursing, while the wind
tugged her hair out of its pins and flapped it into her face. The bonnet flew
through the herb garden, lit briefly on the outstretched hand of a stone nymph,
and fluttered toward the terrace.

Richard Boltwood stepped through
the French doors to the terrace, reached out a long arm, and rescued Noelle’s
hat from the wind.

Sacré
tonnerre, but he
was beautiful. Most improperly, he wore only shirt and breeches. His sleeves
couldn’t hide those powerful shoulders and arms, nor his breeches the muscles
of his thighs. The open neck of his shirt revealed his firm throat and a few
hairs of the masculine chest she had seen and touched only once.

His face was bright with
laughter, his bearing confident. Masterful. Irresistible. In spite of herself,
Noelle quivered inside.

No. This was no time for quivering.
She hurried forward. “Richard, I must speak with you.”

“With pleasure,” Richard said.
“Your bonnet, ma’am.” He held it out but made no attempt to touch her.

Noelle closed her fingers around
the ribbons, and immediately Richard put his hands behind his back. She moved
closer, and he inched away. “In private!” she whispered. She put her hands on
her hips and scowled at him. The hat strained away from her hand, and her hair
flapped in her face. “Stay here! It’s urgent. I need your help immediately.”

“Ah,” Richard said, “I am of
course at your service, my love, but do consider. Your only legitimate excuse
for such a precipitate arrival must be desperate love for me, but if there is
to be no touching, it won’t look like love, will it?” He danced away like the
bonnet on the wind. “You do look delightfully desperate, my sweet.”

“That was your idea,” Noelle
fumed. “I never said I wouldn’t touch you, merely that it would be wiser not.”

“It would have been wiser not to
involve yourself in the free trade. As to not touching me, do as you please, as
long as you understand that if you touch me, I will consider it a clear
invitation to touch you in return.” His lips twitched.

“Nom de Dieu.” She must keep her distance, but he was making that
impossible. “Oh, very well. You may kiss my hand.”

“Your Majesty is most gracious.”
He took her gloved hand in his and tugged at the tip of one finger.
She tried to draw away, but he
wouldn’t let go. “What are you doing?”

“Exactly what it looks like. I
won’t waste one of my burning kisses on a mere glove.” A few seconds later, the
glove was in his breeches pocket. He took her cool hand into his large warm one
and brought it within an inch of his lips.

The warmth of his hand, the heat
of his breath, traveled all the way to her toes. “Get on with it,” she said,
quivering with impatience. Get it over
with before it kills me. When he did nothing, she pulled at her hand.

He didn’t let go. “It’s not
enough. No woman who gallops to her lover’s door would be content with one
little kiss.” He paused. “On her hand.”

Waiting for that kiss was
torture, and she had urgent news. She said in French, “Richard, the excisemen
are nearby! We don’t have time for playing games.”

“This is no game,” he answered in
the same language. “Lives are at stake, and therefore our charade must appear
real.”

Did that mean he accepted her
refusal to marry him? In which case, she should be glad. Or at the very least,
relieved.

She didn’t have time for
emotions. “Lives are at stake, and therefore we must hurry.”

Before she had a chance to
respond, he took the other hand, pried her fingers open, and released the
ribbons of her hat.

It fluttered away across the
lawn. “My bonnet!”

“What’s a mere bonnet when one is
deep in love?” Richard removed the second glove and stowed it in his pocket. He
pulled her close and pressed his hot lips to the back of one tingling hand.

Something inside Noelle pulsed in
response. Yes.

His lips settled hotly on the
other hand.

“Enough?” Richard whispered. “We
have demonstrated love, but what about passion?”

Noelle couldn’t bring herself to
move. Her breathing quickened, and her knees felt abominably weak.

“Only a passionate woman would
ride ventre à terre to the man she
loves.” He turned her hands over and cupped them in his large ones. “You, my
sweet, are the essence of passion.”

He pressed his lips into one palm
and then the other. The pulsing inside her deepened to a throb.

She couldn’t help it. She
whimpered, staring at his lips and her hand.
His tongue reached out and
gently, devastatingly, licked her palm.
Dieu
du ciel. His
arms surrounded her and his heady aroma overwhelmed her senses. She drank it in
through her very pores. I love you. Oh,
how I love you. She pressed her face into the hollow at his throat.

She made a small despairing
sound, and immediately his arms loosened. He pushed up her chin and deposited a
swift kiss on her lips. “You do love me, and you know it.”
Buy links:

Amazon
US
Amazon
UK
Amazon
Canada
Amazon
Australia
Bio:
Barbara Monajem wrote her first story at eight years old about apple tree gnomes. She published a middle-grade fantasy when her children were young, then moved on to paranormal mysteries and Regency romances with intrepid heroines and long-suffering heroes (or vice versa). Regency mysteries are next on the agenda.
Barbara loves to cook, especially soups. She used to have two items on her bucket list: to make asparagus pudding (because it was too weird to resist) and to succeed at knitting socks. She managed the first (it was dreadful) but doubts she’ll ever accomplish the second. This is not a bid for immortality but merely the dismal truth. She lives near Atlanta, Georgia with an ever-shifting population of relatives, friends, and feline strays.
Social media links:
www.BarbaraMonajem.com
https://www.facebook.com/barbara.monajem
https://twitter.com/BarbaraMonajem
http://www.barbaramonajem.com/contact.html
https://www.bookbub.com/profile/barbara-monajem
https://www.goodreads.com/author/show/3270624.Barbara_Monajem
0shares
Scroll to Top